Birthplace: Alderaan (planet was destroyed when Marina was off world at 8 years of age)

…aren't the memories we hold dear, supposed to make you feel good?

My home…my family...my friends…they all haunt my days and nights, still.

Bio:
Marina was 10 years of age, and off world on Coruscant with her grandparents, when she found herself orphaned.

In one sweeping shocking moment, her home and everyone she knew and loved on Alderaan, became a haunting memory.

Born third daughter, to Duke Kyle DeVoe and Sansa DeVoe, she was primed to follow suit in her family tradition of perusing public office as a representative of her beloved Alderaan. She was born at her home, of Setril. Setril was the name of her family estate, high on Mt. Setril, overlooking the Aiden Pass. As with most estates among the aristocratic families, it were of what dreams of mountain top castles were made of.

Only, one day it abruptly did become just a weening dream for her...

Marina had been home schooled up until the age of 8, by her parents, private professors and tutors. She were to attended Grixton, a prestigious preparatory school on Alderaan the following semester, for the next six years. It would have started on her way to studying about the known galaxy, its history, galactic law and political science. This would have prepared and laid out all the academic groundwork for her introduction to the University of Aldera, to which she would have attended by 16.

But Marina would never attend Grixton, nor ever see her home high atop the beautiful mountains of the Aidan Pass. She was 10 when her grandparents took her on a routine trip with them to Coruscant.

Her grandparents being Onan DeVoe, and Representative Vivian DeVoe, who were still part of the active delegates from Alderaan. Although it was a trying time for all the Senate and all representatives of systems within the Empire, there was no indication of what were soon to follow.

The existing Senate for nearly two decades now, had little voice over to what the known Emperor Palpatine, dictated over. They merely were just representatives of the many thousands of Imperial systems… with little voice in government at all. Still, the Senate was allowed only to exist for the time it did after the fall of the Old Republic, for the sole purpose of maintaining and keeping order in their respective Imperial States (systems).

But history demonstrated that the Senate's days were numbered from the day the Empire was created (in replacing the failed democratic Republic). With the final and complete secret construction of a powerful battle station… and its ultimate ensuing first demonstration of it's super laser on Alderaan; it would be fear of such a devastating weapon that would keep all the local Imperial systems in line. To which the Senate found itself to soon being totally abolished by the Emperor… in favor of local Governors, Moffs. To which the fear of the Emperor's new powerful battle station, which became known as the Death Star, would keep all controlled systems in line. With it, the vile Emperor Palpatine had no more use of the ever-bickering senate, to control and keep his Empire intact. It would be fear of the Death Star which would convince the systems not to oppose the Emperor.

It was one more vile addition to his supreme power and arsenal, in which he relentlessly tightened his grip on his Empire.

And it was on that one unfaithful day on Coruscant, that 10-year-old Marina and her grandparents heard the news. Alderaan had been made example of and destroyed. Their beloved family, people and home were no more.

Marina's parents, sister, brother, home, friends and way of life…. all had suddenly been swept away, in less than a heartbeat.

Her grandparents, Onan and Vivian were just as devastated. Millions of their beloved people along with the family had met their untimely fate with genocide. How many Alderaani were left in this galaxy now? It was hard to say…

With no time wasted, they quickly left Coruscant with Marina, following the horrid news of the destruction. And justly so, as soon followed the Emperor's decree to abolish the existing Senate altogether. Emperor Palpatine had believed his power had become complete. And with such a devastating weapon as the Death Star he now had deployed...no system would dare break away from the Empire…nor oppose it.

Education:
Marina was 8 years of age, when Alderaan was destroyed. She had been home schooled up to that time.

Marina's family had a few holdings off world and with the remaining assets abroad, it was decided to keep Marina on track with their family heritage. Her grandparents didn't give it a second thought concerning Marina's education. She was to continue with her studies, following their family tradition, regardless of the life changing events.

Her grandparents, using contacts and connections offworld, arranged for Marina to be admitted to Si Hylta, a prep school on Onderon. Si Hylta was a perfect choice, having the same prestigious class as Grixton had on Alderaan. Besides, the Empire had little presence on Ondeon. And instead of The University of Aldera which she was to attend at 14 on Alderaan...it became Ov Taraba; a satellite University of Aldera, also located on Onderon. Marina, under the care and love of her grandparents, started a new life and studies on that system in the prestigious prep school, of Si Hylta for the following 6 years to prepare her for Ov Taraba.

At 14, Marina finally enter Ov Taraba University. There, she attended for 2 years (with the equivalent of three, as she attended year-round with no vacation), studying political science and law... following her family tradition of diplomacy. At 16, she started to take much interest n ancient civilizations, and as thus, transferred to the University of Timb. There, she continued to study law, but also doubled up with extra studies on ancient civilizations, which Timb was renowned for. She attended Timb for two years. (again, equivalent to 4 years with no summer vacation breaks and extra classes also)

Marina was 14 years of age and attending Si Hylta on Onderon, when the news sounded across the galaxy, of the Rebel victory over Imperial forces at the battle of Endor.

It had been 4 years in passing, since the destruction of her beloved family, friends and home world of Alderaan. With much due celebration, came also the opportunity to reclaim a few key family holdings which the Empire had once claimed State dominion over. They were able to leave Marina safely now on Onderon, while they went on to legally reclaim these holdings from the new forming Republic, while Marina finished her last two predatory years at Si Hylta. By the time Marina was ready to enter Ov Taraba at 14, two years later; they had successfully reclaimed all their rightly family holdings, and looked into starting up a new family business. At 18... She transferred for a year, studying anthropology on Tibrin… At 19…The Corulag University of Economics, preparing herself for a career outside diplomacy…(her grandparents had established a profitable shipping/transport business during all the years, following the fall of the Empire)

At 20… Marina went to The University of Coruscant; deciding to finish up her degrees in law and politics, acquiring a doctorate in the process.

By 22…She finished at The University of Charmath…rounding up much of her own interest in ancient history, before going back to help her grandparents in the DeVoe’s Setril Enterprise…a shipping/transport business.

Bio continued:
At 22 years of age and with a doctorate degree in law and political science Marina was primed as a representative to the New Republic. But, she had no home world to represent. Alderaan had been destroyed for over 16 years. It was but a dream world to which it would be forever in her heart...both fondly and hauntingly.

Marina's surviving grandparents, after the fall of the Empire, had once again secured their off-world family holdings and estates which the Empire had previously confiscated during its rein.

They had enough capital to invest in a shipping/transport company, naming it Setril Enterprise, after their home estate which had existed on Alderaan. Marina being the only heir to the DeVoe off world estates, family holdings, and Setril Enterprise…took to helping with the business quite well. It suited her desire to travel and examine old ruins on many systems that Setril Enterprises was contracted to service. In the two years that Marina worked for her family owned company, she learned to be a proficient pilot and navigator...loving the freedom of space travel and exploring.
And of course visiting sunny beaches on tropical systems.. 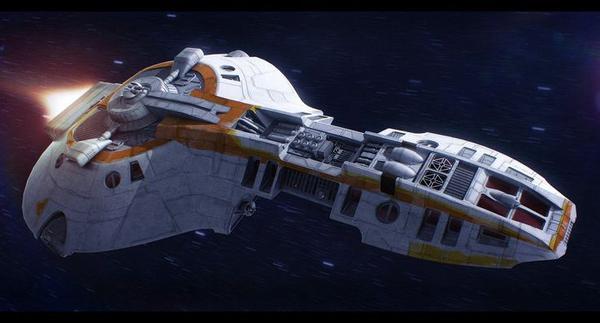 Ship was commissioned to be stripped of offensive and defensive weapons as per Marina DeVoe's request. The Mariner IV is primarily used to explore and see the galaxy by Marina DeVoe while she earns credits to do so by working as a small shipper and transporting passengers to their destinations as pilot for hire. The Mariner IV is equipped with 2 airlocks, a medical bay and support equip that can perform limited rescue and medical assistance/transportation. 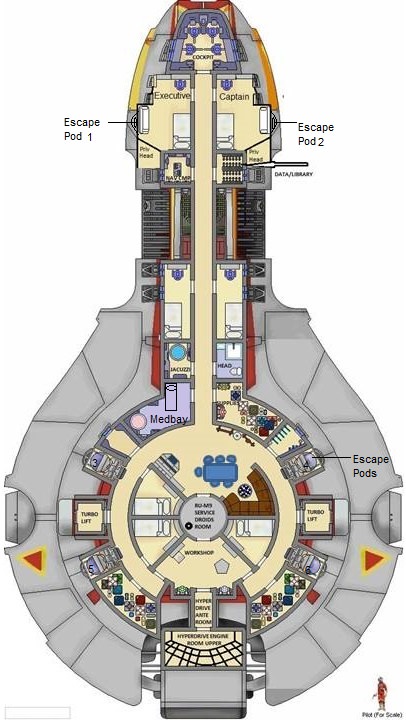 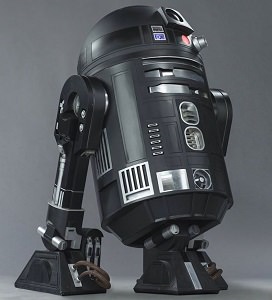 RU unit TK-1213
Note center hub. Cannon turrets have been deleted which were located there.
It has been transformed to a full droid service bay.
Currently the Mariner IV has only one astro mech droid. RU unit...TK-1213 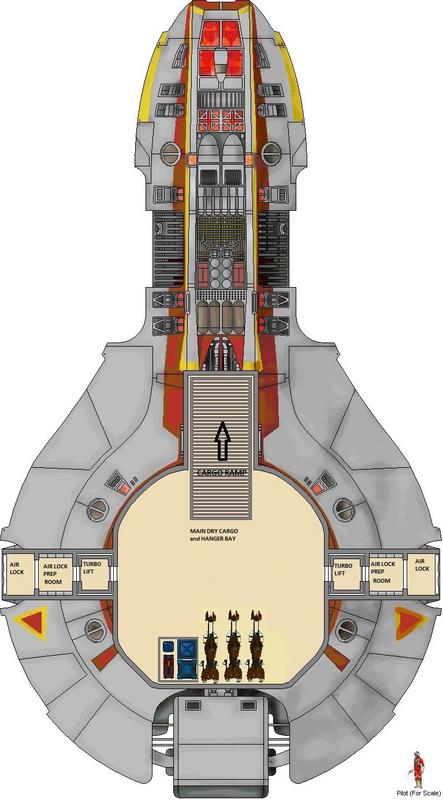